The Spirituality of Dominance and Submission 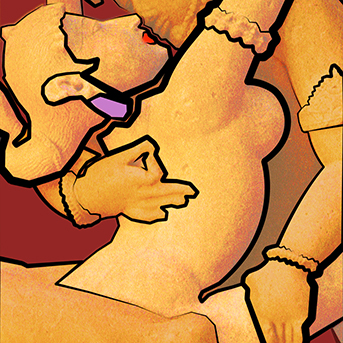 The first is obvious: Submission is the experience of surrender in the most literal way. Eastern religions have long taught that when one is truly surrendered, relinquishing all power and control, allowing what happens without resistance, the ego momentarily dissolves and the soul is liberated.

With his attention and approval, he frees me from guilt and shame about experiencing deep sexual pleasure. When I open my legs for him, he doesn’t tell me I am wicked or bad; rather, he tells me I am a “good girl.” The morality of sex feels like it is resting on its right foundation.

This dissolved ego sense feels exactly like what happens within me when I submit, especially when my husband makes a sexual demand I have zero interest in at that moment. I’m usually in in the middle of doing something when he tells me, “I need my cock sucked now, babygirl.” I’ll feel a flash of annoyance, think ‘oh, not now.’ Then I go down on my knees and take him into my mouth anyway. My ego’s self-importance is—momentarily at least—defeated. I am serving something bigger than my own little wants. Or at night in bed, I’ll be half-falling asleep and he’ll say, “Open your legs, Daddy needs to touch you.” And even though I’m not ready for it, I let my legs fall open and lie still as he slips his fingers inside me. I allow, allow, let go.

It’s even more effective if what he’s doing gets a little uncomfortable or there is a stray bit of pain. I’m not sure why, maybe because it’s a greater challenge to surrender. But almost always, as I yield to him, a sense of freedom overtakes me, freedom from my own will. It’s the only time I lose self-consciousness, when he gives me commands. I just do what he says, accept what is happening, and it becomes this spontaneous flowing thing, me serving him and his needs, following his dictates, no resistance, being here now, being present.

I also find spiritual reward in accepting the love of a man who, in such intense moments, represents “god the father” to me. It sounds sacrilegious, but while I of course do not consider my Daddy Dom to be an actual god, he becomes a meaningful symbolic stand-in for the fatherly aspect of a higher power. With his attention and approval, he frees me from guilt and shame about experiencing deep sexual pleasure. When I open my legs for him, he doesn’t tell me I am wicked or bad; rather, he tells me I am a “good girl.” The morality of sex feels like it is resting on its right foundation.

Actually, my whole self finally feels like it is resting on a more solid foundation. When I submit, I no longer exist in the cramped loops of my own mind, where it is all about ‘me, me, me,’ what I think, or what I want. But neither am I flung away into the fickle disregard of the rest of the world. It is now all switched around: I am nothing to myself, but everything to him. It is relief. And what relief it must be for him, feeling unconditional acceptance from me, love without games. He doesn’t have to manipulate me in order to fuck me. He wants, he takes, he gets, no resistance, no self-doubt. He then becomes everything to me.

Putting Me In My Place

When I read the writing of other submissives, they often talk about being “put in their rightful place.” They usually refer to it in the context of kneeling, or otherwise making themselves subservient to their Dominant, as if their rightful place is below him or her, or less than him or her. But to me, a Dominant is the symbolic representation of life itself. When I turn my body over to my husband, make myself his sexual object, I come to understand that we are all sexual objects. We are all creations of nature and its sexual impulse toward union. Any sense we have of ourselves as an individual being separate from nature is an illusion.

“We do not breathe so much as we are breathed by the universe,” said Alan Watts, the teacher who provided my first introduction to Eastern spiritual thought. I remember how struck I was by that idea, that life breathes us. We come into the world involuntarily, our hearts beat involuntarily, our breath fills us involuntarily, our sexual organs engorge with blood involuntarily. None of us are creations of our own will. And sexual submission allows me to embody that, understand and live that. It puts me in my place as a sexual being, created by life through lust.