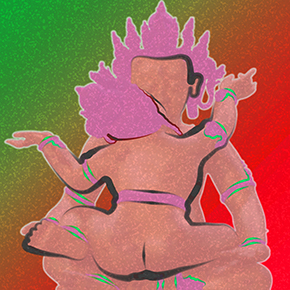 When my dominant Daddy and I first began a thrilling BDSM exploration, we ordered an entire stack of books to help educate ourselves. SM 101 by Jay Wiseman. The Ultimate Guide to Kink by Tristan Taormino. And my favorite: Screw the Roses, Send Me the Thorns: The Romance and Sexual Sorcery of Sadomasochism. It was helpful to know so many people have gone before us and made a map of the territory. We’d have been much more unsure of ourselves without that map. The books validated our desires, warned us of pitfalls, and give us ideas of things to try we might never have come with on our own.

It provides the chemistry, or the “energetic juice” of passion and sex, and according to Deida, it is completely impersonal. One can experience the jolt of sexuality polarity with a total stranger. (I have always wondered about the flash of instant attraction I have felt with certain men—and sometimes women—who cross my path.)

The basis of all Deida’s books is his theory of sexual polarity, which he describes as something very different from love or romance. Love, he says, is about opening one’s heart and relaxing one’s sense of separation. There is no limit to love, it is inclusive: one can love anyone and everyone. Meanwhile, romance is exclusive, focused on one person. It is based on feelings of familiarity, or “at-homeness” with the other. It is the soulmate feeling, the I-feel-like-I’ve-known-you-all-my-life feeling. (I feel both an inclusive open-hearted love and an exclusive romantic love for my marvelous husband.)

But, says Deida, there is a third way of relating, and that is by tapping into a sexual polarity, which he describes as the “arc of energy,” or the essential magnetic pull between the masculine and the feminine. In his definition, masculine energy is active, purposeful, assertive, and focused, while feminine energy is passive, free-flowing, open, and yielding. He adds that the force of this polarity depends on energy and not gender. After all, not all men align with the masculine pole, nor do all women align with the feminine pole. But when conditions are right, and two people who inhabit different poles come together, sexual energy generates itself effortlessly. It provides the chemistry, or the “energetic juice” of passion and sex, and according to Deida, it is completely impersonal. One can experience the jolt of sexuality polarity with a total stranger. (I have always wondered about the flash of instant attraction I have felt with certain men—and sometimes women—who cross my path.)

“We are affected by sexual polarity from head to toe,” Deida writes. “Radiating feminine energy magnetizes masculine energy ... A natural and energetic force flows between the masculine and feminine poles, and your body-mind is reoriented just like a compass.”

Deida adds that “to encounter the opposite of what you are is healing,” and allows someone to inhabit his or her own “uninhibited sexual essence.” And oh how I know that to be true. It feels very healing to me when my dominant forcefully takes me and invades me with all his thrusting, penetrating energy. Or maybe the healing part is that I can fully experience my own feminine energy? I wonder if it feels healing to him to be able to sink into me while I am being so open and receptive. Or maybe the healing part for him is that it allows him to fully experience his masculine energy?

The Three Stages of Relating

In his books, Deida describes three stages of how couples relate to each other. As I read them, I feel they are describing relationships exactly as I have seen them unfold in my life as well as the lives of others.

Stage One, he says, is the “dependent” stage, where each person needs something from the other. It is a traditional relationship in which the man is dominant in all things and trades his protection of a woman for sexual favors and the care of his children. In a Stage One relationship, the man is king of his castle and may keep his woman under control with threats of violence or financial deprivation. A woman’s right to sexual consent is also meaningless as she is in no way a man’s equal, nor even really a whole person to him. This is old school sexual domination, and what the men called out in the #MeToo movement embody with their reigns of sexual intimidation. Margaret Atwood’s famous novel The Handmaid’s Tale, and the TV series based on it, portrays this kind of relationship in disturbing detail.

A Stage Two relationship is 50/50, and this is the kind of equal relationship most so-called enlightened people strive for today. Each partner is independent, respected, with equal voice in all matters, including sexual. This kind of relationship is the goal of feminist efforts, and is now the model for the way we understand relationships “should” be. But while this is a vast improvement over a Stage One relationship (and a necessary step along the way), there is an inherent flaw in the 50/50 relationship. According to Deida, all that equality mutes sexual polarity. Without two partners fully inhabiting the masculine and feminine poles, there is no more magnetic force, no more pull, and passion fades.

Men in Stage Two, Deida writes, are “afraid to sweep a woman off her feet with the kind of uncompromising love that could fill her deepest desire for intimacy. Meanwhile, a second stage woman is afraid to give a man the kind of devotional love that wants to overflow from her heart. Both are cautious not to let go of their own boundaries or to trespass beyond the emotional boundaries of their partner.”

Both partners in Stage Two are safe, but a feeling of flatness can pervade the relationship. Eventually, dissatisfaction grows. (I have experienced this many times) “A second stage woman may come to realize her heart is still yearning,” Deida continues. “A second stage man is safe but not sufficient to pierce the deepest caverns of her heart ... At the very center of her life, something is missing.”

While Deida seems to have arrived at this conclusion from his studies in Tantric philosophy, I find almost identical language from sex researchers Marianne Brandon and James Simon, writing in Psychology Today about “The End of Sex.”

Exciting, primal sex in a trusting, respectful relationship requires the same elements we vilify in men today. We teach men to contain their sexual interest, resist assertive overtures, and hide their sexual longing. How confusing it must be for a man to develop a sensitive, responsive, polite sexual style, only to be ultimately told by the woman he marries that he is a boring and uninteresting lover ... Experiencing her partner’s sexual confidence and longing is a fundamental aspect of good sex for a majority of women. Stripping men of their sexual assertiveness diffuses women's sexual pleasure. Women are not experiencing this shift in their relationship and sexual dynamics as empowering. They are grief-stricken over what their lives are missing.

So, what is a woman to do to become fulfilled in a sexual relationship? Be willing to grow beyond such stringent equality. Or, at least that’s how I interpret what Deida means when he says the feminine partner “must be sucked through the black hole of her need before she can emerge like a butterfly with wings of love. The third stage woman no longer searches for love, but rather breathes love, relaxes in love and radiates love.” Or as Brandon and Simon put it, a woman can decide to align with the dictates of her primal sexual brain, and surrender to her masculine partner’s more assertive sexual instincts. “Triumphantly, a woman can now choose to feel vulnerable during sex, because it feels good—not because she is forced into that role.”

Deida continues that the third stage woman doesn’t feel the need to be adamant about maintaining her personal identity. She simply practices giving love, moment to moment, in the ecstasy of surrender. Her identity is not derived from her man (first stage dependence), nor from herself (second stage equality). “Her need for self-identity is virtually gone, so bright is the shine of her love.”

I wholeheartedly agree as I read these words in Intimate Communion. My identity did indeed feel swallowed up in the early days of our D/s discovery, surrendered along with my body to my very masculine husband’s will. And I did feel myself shining brightly with love. I felt incandescent with it.

But I like to think that many of those practicing BDSM do so out of a longing for a more evolved Stage Three relationships. Yes, we may embark on the journey for the immediate sexual rewards, but we continue for the deepening of intimacy and long-term spiritual growth as a couple. And although it will take more months of exploring before I fully understand that the practice of D/s is not the destination, but a vehicle for a journey, even in the early days I think I understood that my preoccupation with things such as training and triggers and maintaining a submissive mindset was beside the point. The point was, and is always, intimate communion with each other, and the opening to love.

But whatever reason motivates others to turn to D/s, understanding the distinction between Stage One male dominance, which dehumanizes women and creates an ugly rape culture, and Stage Three masculine dominance, which celebrates women and creates shining love, was a huge gift to me. It was a salve to the guilt stirred up by the feminist chatter in my head that I am breaking the rules by sexually submitting to my husband. After all, the feminist rules were designed to take women from Stage One into Stage Two 50/50 relationships, a vital leap ahead in the war between the sexes. Unfortunately, Stage Two 50/50 is also the stage where passion often goes to die.

Luckily for us, my husband and I found a seemingly bottomless well of passion through D/s. And thanks to Deida’s book, I no longer felt that I was somehow going backwards when I allowed my husband to do what he wanted to my body. I could feel that we were moving together into a more evolved sexual dynamic, where my feminine nature and called forth his masculine self to ravish me. And what heaven it was to be ravished by him ...