Rhett Tames Scarlett; The Desire to Be Dominated 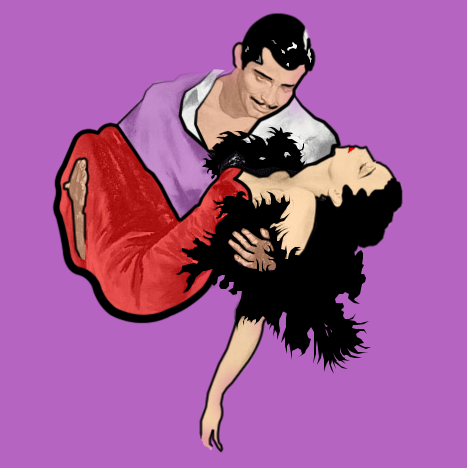 One of the most iconic love scenes in movie history is in Gone With the Wind, when Rhett Butler overcomes the resistance of Scarlett O’Hara, scoops her up into his arms and carries her up to bed, forcing her to submit to his sexual lust. Cut to the next morning, Scarlett waking up smiling, happy, and even singing in bed. As we watch the movie, we think, Finally! After watching their years-long power struggle, we are hopeful the two star-crossed lovers, so well-suited for each other, will finally be together in peace. Then Rhett enters the room, but instead of kissing her and sealing his dominance of her, he expresses regret for his crude behavior. Scarlett’s happy bubble pops, and they once again fall back to miserably battling each other for the upper hand.

The sweeping-her-off-her feet scene is much loved by romantics, and often reviled by feminists. If I do a Google search for “Rhett Butler” and “dominance,” I find numerous feminist screeds—some vaguely scolding, some vehement—against what is considered an obvious example of our cultural glamorizing of rape. For example, the author of a book called Love Does No Harm, states this scene presents a “dilemma” to people of moral conscience in the way it eroticizes male dominance and female submission. It is a patriarchal choice to “portray” the power dynamic this way, says the author. As if the moviemakers had imposed a perverse or unnatural frame around what happened between Rhett and Scarlett.

This is the essence of the feminist argument, that we are culturally conditioned to believe male dominant behavior is sexually exciting. “In a million books, movies and perfume ads,” says the author of Love, Honor and Negotiate, we are inundated with images of “a powerful and passionate man, bent over a woman who, weak with rapture, is arched back in his arms ...”

But did Rhett really rape Scarlett? Is the movie scene of her smiling and luxuriating in what happened between them a patriarchal moviemaker’s spin? Not according to Margaret Mitchell, who wrote the novel on which the movie is based. Mitchell describes Scarlett’s thoughts like this:

He had humbled her, hurt her, used her brutally through a wild mad night and she had gloried in it.

Oh, she should be ashamed, should shrink from the very memory of the hot swirling darkness! A lady, a real lady, could never hold up her head after such a night. But, stronger than shame, was the memory of rapture, of the ecstasy of surrender. For the first time in her life she had felt alive ...

Ah yes, I think, the ecstasy of surrender.

Clearly, Scarlett was not raped, she was ravished by her husband. I think most women instinctively know this, despite what could be considered the cultural counterprogramming of feminism. Like Scarlett, we might feel we should be ashamed to admit it, but Clark Gable as Rhett Butler can still send us into a swoon of longing for a man to sweep us off into a “wild, mad night.” Or, Clark Gable not just as Rhett, but as any of the dominating males he embodied so well. I’ve watched him throw Claudette Colbert over his shoulder and whack her on the ass, or pick up Joan Crawford and spank her with a hairbrush while holding her mid-air. (Later in the movie, Joan Crawford shows him she is ready to be with him by handing him the hairbrush.)

Same goes for Cary Grant. Remember how he face-palmed Katherine Hepburn and pushed her onto her rear in Philadelphia Story? Or, think about Burt Lancaster chasing Deborah Kerr up the beach in From Here to Eternity. She falls onto the blanket, lies submissively waiting as he looms over her, then he falls on top of her, gives her a ravishing kiss. She lies there in a trance, sighs and says, “I never knew it could be like this.”

Oh yes, the glory days of Hollywood were full of dominating males, and you knew once a hero spanked the heroine, with her kicking and hollering to the playful music, they were destined to reach their happily-ever-after. Even all the way through the early 80s, the macho men of the silver screen, epitomized by characters like James Bond, or actors like Jack Nicholson and Mel Gibson in just about any role, took charge of their women in a hands-on way.

In all those movies, throughout all those titillating scenes, I do not believe Hollywood writers were trying to mold women to feel a certain way. Nor do I believe they were mindlessly parroting the unspoken cultural dictates on how women should sexually relate to men. Rather, I believe the movies reflected what their writers observed about the actual sexual dynamics of the time, particularly how women respond to dominant males. I suppose one can make a good chicken-or-egg argument about what came first—the movie scene telling us how we should feel or the feeling informing the movie scene. However, Hollywood is financially dependent on giving people what they want, and women would not buy movie tickets to films, particularly romances, that do not speak to them.

Perhaps the strongest evidence for what speaks to women sexually can be found on the print side in the romance genre, written by women, for women. Kathleen Woodiwiss practically invented the historical romance in 1972 with her “bodice ripper” novel, The Flame and the Flower, and it’s dominating hero. I read it as a teenager, not knowing how controversial the first sex scene in the book — in which the hero forces himself on his soon-to-be-love would eventually become. I only knew it thrilled me, and throughout my teenaged years, I devoured romance novels just like it, one after the other after the other.

It is definitely a conundrum to feminists that, despite decades of female empowerment and consciousness-raising, so many women still become aroused at the idea of male sexual dominance. And it was a conundrum to me, the first time I got down on my knees before my husband in response to his sexual command. However thrilled I was in the moment, I was not oblivious to the harm done by the sexual objectification of women in our culture. In the months that followed, I would often have to beat back the disapproving voice in my head and give myself permission to do what mind and body told me it wanted. Cultural conditioning cuts both ways, and feminism is sometimes as guilty as patriarchy in telling us that we cannot trust ourselves or our desires.

But that first time, kneeling in front of my husband as he unzipped his jeans, I experienced a sexual thrill unlike anything I’d known before. I felt electrified. I felt alive. How wonderful it was to discover that all the rapturous language in movies and romance novels was not just elusive fantasy, but could be made real. And not by the arrival of a fictional hero, but made real by my own perceptive husband. As Scarlett O’Hara realized about Rhett Butler the morning after he ravished her, a man she’d been married to for years: “The man who carried her up the dark stairs was a stranger whose existence she had not dreamed.”

Yes, some strands of feminism may disapprove of Scarlett’s thrill at her husband’s domination, as well my own sexual submission to my husband. And while that is sometimes still a struggle for me, after the five years of benefits I have enjoyed, I can now say in Rhett’s own immortal words: Frankly, my dear, I don’t give a damn.