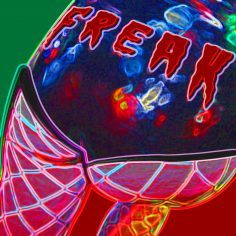 Still, I feared going that far. I worried I was becoming freakish. However much I loved the power exchange of D/s, I didn’t like the idea of going over some dark line, and getting lost in freak territory.

Oh yes, I was absorbed, but while I admired those people and their commitment to their kinks, along with their no-holds-barred way of chasing what made them feel good, in those early days none of it made me feel like I was in the company I necessarily wanted to be in. Of course, I was learning that the photo of something often makes it look more unpleasant than it actually feels. My dominant Daddy had taken photos of me in a breast harness that made me wince to see. The harness looked severe and painful, with my breasts bound so tightly. But it felt wonderful.

Still, I feared going that far. I worried I was becoming freakish. However much I loved the power exchange of D/s, I didn’t like the idea of going over some dark line, and getting lost in freak territory. I didn’t want to become unrecognizable and unreal to myself.

I wanted a wise teacher to tell me, “Yes, woman, letting your husband torture your nipples is a spiritual exercise.” I wanted to continue my noble project of submission as a path to God. I didn’t want it all to just be a perverted fetish. Not that there’s anything wrong with indulging a fetish. But it was the spiritual angle that calmed the feminist chatter in my head that I was betraying women everywhere by handing my right to consent in the bedroom to my husband.

“Individuals experienced a reduction in the stress hormone cortisol and elevation in testosterone levels after kink activities, suggesting that there is a biochemical enhancement for some who engage in these behaviors.” This same study also “revealed improved measures of psychological relationship closeness in participants. Both people who received and administered kink activities were notable for these increased measures of intimacy.”

Reading that study helped, allowed me to stop worrying so much, and tamp down on my need to justify my sexual longings as “not sick.” Although I suppose me writing all this down is one elaborate justification, my own version of women posting their pictures on Fetlife, pussies exposed, see what I can take?