Good Dominant or Bad Dominant? Depends on the Sub's Needs 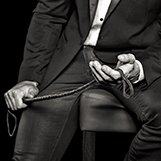 In weighing the frequently-asked question whether a Dominant can be considered “good” or “bad,” a submissive can find numerous articles all over the Internet that list desirable characteristics in a Dom, characteristics such as confidence, creativity, consistency, maturity, self-awareness, etc. Certainly, naturally dominant traits are advantages when assessing the quality of a Dominant. But I am going to take a different approach and say that that it is not necessarily a Dom’s character traits that are most important, but his or her motivation. Why does he or she want to control the sub? Or to be more precise, from what stage of development is the Dominant operating from, and does it correspond with the submissive’s stage?

I am going to take a different approach and say that that it is not necessarily a Dom’s character traits that are most important, but his or her motivation.

A Stage One Dominant could best be described as the Caveman Dom. This domineering guy (because it’s usually a guy), practices old-school man-in-charge dominance, which is very co-dependent, very needy, and often insecure. This kind of Dominant is more bluster than confidence, and may try to feel powerful by using fear, blunt force, or more subtle means like intimidation or bullying. Now, if it sounds like I am saying this kind of Dom is “bad,” well, it depends on who he is paired with. The Stage One Dominant can always find a counterpart in a Stage One submissive who also feels dependent or needy, or is perhaps drawn to macho talk and displays of power. A Stage One sub might even feel more at ease with a Dom who “speaks her language” of traditional roles and tight control, or has been swayed by the biblical trope that men are superior and women inferior. Any hint of equality can be anathema to a Stage One sub, meaning plenty of slaves can thrive under this type of domination. But subs beware, because this is the type of domination that abusers are made of, both kinky and vanilla. The Stage One Dom may not always take the submissive’s needs or feelings into account because the sub is basically an object to prop up the Dom rather than a person in her own right. Of course, a big part of the submissive fantasy is denial of self in deference to a Dom’s desires, which is another reason why this kind of Dom may not be experienced negatively by a sub, even if his domination borders on what others would call abuse.

In the third stage of development, we encounter the Ravishing Dom, who despite loving and caring for his or her sub quite fiercely, is not so much under the sway of the rules established by the BDSM community. This Dom answers to a higher power, the power of love, and takes seriously a responsibility to fulfill the sub’s desire to be controlled and taken. A Stage Three sub craves to let go into true surrender more than he/she worries about safety and policing boundaries. A deep trust in each other becomes the foundation of a Stage Three dynamic far more than negotiations, contracts or safewords. Consensual non-consent may come up at this stage, while roleplay fades, as neither side can bear the thought of artifice in their power exchange. A Stage Three D/s couple lives the ultimate in BDSM romance and true power exchange; yet, a Stage Two sub would likely find the actions of a Ravishing Dom alarming, unsafe, and may even confuse that Dom for a self-centered Stage One brute. But this type of Dom ravishes not out of insecure neediness, but out of confident love and a deep understanding of his sub’s needs. Because both partners offer themselves to the power exchange dynamic so openly and so fully, the sexual polarity between third-stage Dom and sub is extreme, and the passion between this couple becomes transcendent.