Are Women Wired for Submission? 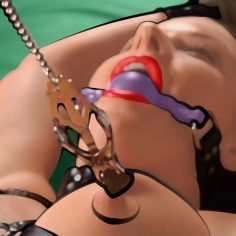 When I started a blog about my experiences as a submissive wife, and put forth my feeling that I was “wired” for submission as a woman, I often heard from other women who begged to differ. Especially women who are of a more dominant bent. Fair enough. Many women do align with what Tantric philosopher David Deida would call active “masculine” energy (although many might object to that word choice as well), while plenty of men prefer to align with passive “feminine” energy. Of course, one an easily dispense with a gendered description of the two sides of the D/s equation, and just call it dominant energy or submissive energy, and I often do. Yet it remains interesting to me that when I submit, I have such a strong feeling of coming home to my own intrinsic nature as a woman, a nature that historically has been presented as feminine.

Yet strangely, in my own discovery of the joys of submission, I felt I was violating the cultural pressures of feminism far more than I felt I was conforming to the pressures of the patriarchy. It was fairly maddening to me, because I so badly wanted to be a good feminist and so fervently believed in its tenets, yet the feeling of being pulled by my female nature toward submission remained overwhelming.

Then there’s the mind-boggling span of spanking genre in which every possible spanking configuration has a niche, the submitting to the schoolmaster, the moody billionaire, the doctor, the sheik. It amazed me, the sheer volume of output surrounding these fantasies. True, most of it is dreadfully written stuff, laughably bad. But clearly, women were responding to them in a big way. I certainly did. I remember getting hooked reading Taken by the Duke late into the night, caught in a voluptuous spell by it, my brain churning out chemicals that made warm blood rush between my legs.

I also remember wondering, would a man be as likely to be as aroused as I by this tale? Would a man be as likely to write the words I found in one submissive wife’s blog, in which she describes the intensity of discovering submission as an overwhelming desire to stay on her knees almost constantly? That desire, the blogger wrote, “powerfully controlled” her body. “I was besotted with submission. Saturated. Infused. Owned.”

Okay, I have no doubt there are submissive men who could relate to those words as deeply as I did when I first stumbled on them. And it might be true that gender has little to do with one’s inclination toward either dominance and submission. Or, it could be true that our cultural training in what constitutes masculine or feminine behaviors is what tilts us toward one or the other. Most feminist writing definitely looks the lens of cultural pressures to act according to gender norms in our sexual lives, and those pressures haven’t gone anywhere despite feminism’s best efforts to neutralize them. Yet strangely, in my own discovery of the joys of submission, I felt I was violating the cultural pressures of feminism far more than I felt I was conforming to the pressures of the patriarchy. It was fairly maddening to me, because I so badly wanted to be a good feminist and so fervently believed in its tenets, yet the feeling of being pulled by my female nature toward submission remained overwhelming.

Science has already established that there are gendered differences in how our brains operate cognitively. Researchers have also established men and women have different sexual psychologies, and respond positively to different types of sexual triggers (men are more likely to excited by visual images and women more likely to be excited by written stories). So would it be so surprising if there are intrinsic gender differences that might pull one toward dominance or submission?

In a 2019 article called “The End of Sex,” that appeared in Psychology Today, Dr. Marianne Brandon and Dr. James Simon write, “Exciting sex—primal sex—emanates from the more ancient biology we share with other mammals. Our biological nature has instilled in all male and female mammals some basic, unique instincts that make them want sex. Human bodies continue to respond to sexual triggers as our ancestors did, thousands of years ago.” The authors of a 2013 paper published in Neuroendocrinology Letters would no doubt agree, as their survey about sexual arousal in women and men led them to believe that female submission could be an evolutionary strategy to increase the likelihood of getting pregnant.

I don’t know for certain whether it is because I was born a woman, but clearly, the wiring of my brain and/or the action of my hormones compels me toward a feminine yielding to my masculine partner. And I find myself outraged that I am so late to this way of being, that I only discovered this part of me, and the man able to liberate it, after a lifetime of lackluster 50/50 sex. I am especially outraged that I have discovered it at an age when my sexual response is nothing like it what it was back when I had plump, fertile ovaries. At times, I feel a vague anger toward the feminists of yore who worked so hard to bring about the sexual revolution. Yes, they made it possible for me to enjoy greater autonomy and control over my body, but they also unknowingly made it more difficult for me to recognize my true sexual nature.

Then I think, no, that isn’t right, one has to be able to be an independent self in order to be able to offer true submission. A woman’s submission can’t be taken against her will, it must be offered voluntarily, without coercion. Sex that is taken without consent is criminal rape that hurts, not submission that heals. Without the freedom granted to me by feminism, I could not have a D/s life at all.

Still, I wonder. Did a cavewoman’s sexual surrender feel the same as my submission does to me? Did 18th century submission to one’s husband lead to any version of bliss? If it is a universal primitive response, or an evolutionary mechanism built within women so they would allow themselves to be fucked, then wouldn’t it work no matter when and where?

Then again, as far as nature is concerned, the important thing is probably not the level of excitement aroused by dominance and submission, but in the success of D/s couples in making babies. I found yet another study, published in 2017, that explored the subject of arousal in BDSM. While “the majority of males fall along the dominant end of the spectrum and the majority of females fall along the submissive end of the spectrum ... we find increased reproductive success in a parental pair of dominant men and submissive women as well as in pairs consisting of dominant women and submissive men.” It seems, the authors concluded, “that sexual arousal by dominance or submissiveness may help its bearer independently of his or her gender.”

In the end, whether we are wired for submission by gender or not, the sexual practice of D/s satisfies.