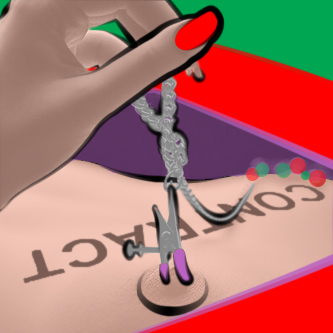 Tantric philosopher David Deida best describes the dynamic we are trying to live now. He advises the dominant man to “listen not to what your beloved says she wants, but what love tells you she needs.” He declares that a man can ignore what his woman says she wants if love demands it.

Yet, over time, we’ve found ourselves dropping the words, and eventually drifting away from material written for a BDSM audience. Most of it feels designed to keep it safe for people who primarily use bondage and discipline to get off sexually. Of course, there’s nothing wrong with getting off good and hard; Michael and I have been getting off plenty. But we feel ourselves primarily motivated by the desire for greater intimacy, and greater authenticity. When we use phrases like “scene” or “play,” it seems to imbue our power exchange with the artificiality of roleplay. We are in agreement that anything that suggests it’s a game or a role we are pretending at leaves us cold.

We also don’t seem to resonate with slogans such as “Safe, Sane, and Consensual,” or coming up with “safewords,” or rules of “aftercare.” These concepts clearly seem to be important when pursuing sex between people who don’t know each other well yet, or the uncommitted. But right now, they feel irrelevant to us, married people who know and trust each other completely. Plus, the idea of a safeword is especially problematic when I am trying to figure out how to turn my sexual power over to him. A safeword implies that the power is still and always mine, so it feels to me as though it undermines the whole dynamic.

Another phrase we encounter a lot? “Respect for emotional safety.” Somehow this puts me off as well, I’m not sure why. Who can object to emotional safety? Yet, I wouldn’t be doing this if I wanted emotional safety. The further we go in our power exchange journey, the less we feel like clinging to safety, and the more we want to turn ourselves over to the perils of the unpredictable and unknown.

Yet, we quickly realized we were better off allowing our D/s life to unfold spontaneously. Unplanned, no scene, just following the impulse of the moment. Most of our attempts to plan a specific scene made it feel mechanical, or like a game, and we couldn’t seem to relax into it. And of course, reality rarely goes according to plan anyway, and rarely does it feel like one expects it to feel. To plan a detailed scene more often leads us to disappointment than pleasant surprise.

We do, of course, spend a lot of time talking about it all. We still make brief forays online and tell each other about the images and ideas we find intriguing.

Daddy will nod, hm, interesting. But we will not set up a specific scene to do this. He might one evening decide to tie me like that if the mood strikes him. Or, he might not. Or, he might put his own twist on it. Sometimes his version is not anything I would have imagined for myself, let alone thought to spell out. And that is exactly how I want it. In fact, I find it irritating if he asks me to spell out anything or tell him what I want. I don’t want responsibility for any of it. I want to be free of having to think about it. For me, submission is pure freedom.

Like this morning, I wake up with my husband’s hand reaching between my legs. Before D/s I might have pushed his hand away, I am sore from too much sex already, and not in the mood. But of course, before D/s he wouldn’t be reaching at all, he’d have waited for me to wake up, might have tried to measure my receptiveness before whispering, “I want to touch you.” Then he’d wait for my consent, which I may or may not have given after a torturous mental assessment of my mood and desires and weighing the costs of refusal. Would he be discouraged from offering in the future if I didn’t accept? Would he worry I don’t find him desirable anymore?

Then again, suppose I did consent, and opened my legs to him. Before D/s, Michael would then finger my pussy with a sweet sort of reverence, a respectful and loving touch that responded to every move of my body or sound I made. He’d have given me lovely orgasms well-spaced apart. Before D/s, he only rarely touched my ass, and even then only hesitantly, carefully, as if not quite sure what to do with it.

This morning, as my Dominant, he touches me very differently. His hands are confident now, no hesitation, no permission asked. He no longer measures my response in the same way, as if trying to guess what I want. He already knows me inside out, and his fingers move inside me the way he wants, deep and hard and insistent. And right now, I feel taken by his fingers in the same way he can take me with his cock. He no longer keeps respectful distance from my ass, but plunges a finger in that hole, too. There is no more waiting for space between orgasms, either, they blend into each other in orgasmic rushes, building, and building ...

This is not a scene. We are not playing a game. These surges of sexual heat keep exploding between us unplanned and unexpected, carrying us away. No moment is predictable anymore. We are surprising each other always.