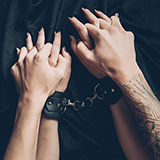 I was pretty nervous showing up that first time. A woman came up to me and said, “What’s the password?” There was no password, so I just said, “Um, Fight Club?” She laughed and dragged me into a tent.

I was pretty nervous showing up that first time. A woman came up to me and said, “What’s the password?” There was no password, so I just said, “Um, Fight Club?” She laughed and dragged me into a tent. I found a cross-section of people, all these colorful characters, and they made me feel comfortable right way. They kept asking me, “What’s your kink?” And I’d say, “I don’t know what my kink is, I’m exploring. Maybe feet?” During the course of the day, people were busting out toys, different gadgets like an electro thing. I thought, whatever you’ve got, let’s do it. And as different people let me feel the snapping and the sensation, I’d say, do it again, do it again. All those different sensations on my skin got my wheels spinning. I was enjoying it so much, I didn’t want to leave.

Basically, I fell in love with the people in the community, fell in love with the idea of exploring these things. And I was going to more and more munches. And finally, a big event came up, it was Kinko de Mayo, and I asked Deanna, who I’d been dating, if she’d like to go with me. I was surprised and happy when she said yes, because I really wanted to share all this with her. That’s about the time I asked her to be my girlfriend.

So, we go to this event, with all these workshops, and we had to do BDSM 101 first, and they talked about all kinds of rules, so many fucking rules. But then we sat in on some flogging classes, some rope classes, we watched a guy take a hard boot kick to the crotch, which was funny. We saw a woman tied to a St. Andrew’s cross, having her breasts flogged for 45 minutes, to the point of tears. It seemed like a real release for her. I loved being around all this, I was like a kid at Disneyland, taking it all in.

Deanna: I’d never really been interested in kinky stuff before, I always thought it was kind of weird. But in the workshops, it was more interesting than I expected. At least in a voyeuristic way, it was fun to watch. And some things did appeal to me. I’d think, yeah, maybe I want to try that, maybe I want to try this ... But we didn’t have a full understanding of what we were getting into, and for a long time we were just voyeurs, getting off on watching.

JJ: Yeah, at first, we felt like we were falling through the looking glass. I bought a beautiful leather flogger, and I think it was two years before I actually used it. But eventually we started trying out a few things, some handcuffs, some floggers. I bought her a collar, thought it looked cute.

Deanna: I liked the flogging and different things. He didn’t hit me too hard, I’m not really into pain or massive hitting. But it was fun, and also therapeutic in a way. And I liked knowing, Hey, there are other things we can do in the bedroom.

JJ: Yes, there’s a whole plethora of things to do and try. And so we’ve just been kind of going along with that since, indulging in kinky stuff every now and then, having fun with it. Restraints, floggers, nipple clamps. We’ve done lots of tactile play – you know, feathers and ice and things like that. It’s the tactile sensations that appeal to me more than anything. I bought a spreader recently; we’ve had some fun with that.

JJ: I consider myself a switch. I have fun dishing it out, but I don’t always want to be in control. I like to receive sensations, I want to be flogged sometimes. I also like to be tied up; it’s kind of terrifying but also very arousing. But overall, I don’t feel like we need to stick to any kind of role, we just do what we feel like doing, take things into the bedroom that entice us.

Deanna: I’m not into labels at all. Being submissive is not my thing, but I guess I’m a bottom for the most part. But still, I like to initiate, tell him what I’m in the mood for. And I like doing things to him sometimes, so I guess you could say I’m a little switchy.

Deanna: No, it’s not my identity really, I just like to dip into it.

JJ: I don’t believe in sexual orientation actually, even though I called myself straight most of my life. I think we’re all fluid, we can all move along a spectrum depending on the circumstances. For example, I’ve discovered an attraction to MtF transgender women. And I think if the circumstances were right, I might even suck a cock. Hasn’t happened yet, but who knows? I think I do identify as kinky, though, it’s always been part of me, wanting to go beyond standard sex. I was always voyeuristic, wanting to watch, always into taking my clothes off and being naked around other people. And when I found this community, even though I’m not hardcore BDSM, I felt like, hey I’m the same people as you. We’re all kindred.

Deanna: Kids. Privacy. We always have our adult kids in the house. It’s hard to feel free to do what you want when you think they might hear you.

JJ: Yeah, regular life really gets in the way. Some people seem to be so committed to the lifestyle, nothing stops them. But we seem to have a lot of life obstacles to get over, and so we don’t get to be as sexual as I’d like, let alone as kinky as I might like.

Deanna: I like the dressing up. I like wearing the sexy clothes, the leather. Even if we’re not going anywhere or seeing anyone else, I still like dressing up for each other.

JJ: I like all the toys, the restraints, blindfolds, what have you. The tactile sensations you can give and you can receive. That’s important to me, I want to be able to touch skin, feel skin. Maybe that’s one reason I don’t get into more of the extreme stuff, I don’t get things like diapers or watersports. But I will watch anything. I am always interested in watching, even things I’m not into myself.

Deanna: Yeah, I still like the voyeuristic aspect. We can go to a party and watch people and think about what we want to bring back and try. We went to a High Protocol Party once, and it was so interesting to me, seeing people dressed like servants. I liked being waited on. It was fun to watch the slaves being disciplined, and just watching how the whole thing played out.

JJ: I like that in this lifestyle, you’re so much more free to explore, you’re encouraged to explore. Pretty much anything consensual is good, nothing is wrong or bad. I think it’s given us a healthy perspective on sex. And all the classes on kink we’ve been to, it feels like we have an educational foundation in how to get closer, how to be better for each other. I don’t think there’s a hard line between kink and sex for us, they seem intertwined to me.

JJ: Sometimes it can feel like a double-edged sword. Yes, we love to experience the openness of our kinky times, but it can also put a strain on the relationship if we’re not in sync. If one of us is more in the mood, or wants to open up more, and the other doesn’t, it can make those kinds of mismatches more obvious. When you add more to your sex life, then there are more things to trip over.

The other thing is sometimes I do feel pressure from within the community to become more of a Dominant. All the women are into being controlled. They want to be taken. I think my wife would be happy if I was always Big Daddy, always ready to be in control. So, I do feel some psychological pressure to play that role. Sure, if she calls me Sir once in awhile, that can make me hard. But when I try to be a Dom, I’m thinking: This isn’t really fun, this is an obligation. God forbid I screw it up, let anyone down. I haven’t figured out how to not feel that pressure.

JJ: I’m pretty much an open book. I don’t want to hide; I don’t care if people know. I like talking about sex to my friends, I’m honest about who I am. I don’t want to make anyone uncomfortable, but how can you like me if you don’t really know me? So, I don’t hide.

Deanna: I think our kids might know at least a little, but I don’t like talking about it to them. They are already skittish about sex in general and really don’t want to hear it. So, I’m not exactly hiding, but I’m not exactly out either.

Deanna: Not really, I’ve seen polyamory totally destroy relationships. Several friends we’ve had in the community split up because of polyamory.

JJ: Well, we also have friends who seem happy with polyamory. But I don’t know if most people in the community who do it are really practicing polyamory, I think of it more as polyfuckery. They just want to fuck other people, so I don’t know why they don’t just call it that. Because it’s nothing to do with loving other people, it’s about fucking. You can love someone without fucking.

Deanna: Take it one step at a time. Figure out what it’s about before rushing in.

stories around the web