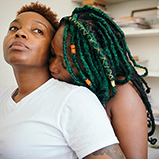 Then one day, after my darling Daddy had given me the extra hard beating I’d begged for, he was feeling so pleased with his domination prowess that he left me weeping on the couch and went out on the porch to sip on a drink. By the time he came back in, he found that the submissive he thought he had handily subdued was gone, and a furious wife had taken her place.

Nothing that happened in those early days convinced me I was lacking for care in the aftermath of our BDSM play. I never felt broken down or needy after surrendering my body to my Dom’s delicious tortures. Maybe I wasn’t experiencing quite enough pain to get overly clobbered by the flood of adrenaline and other chemicals a rough impact session can elicit. Or, maybe the way my husband and I naturally clung to each other all day, every day, meant I was getting enough aftercare by default. But whatever the reason, I considered the notion of aftercare overrated, and even if I HAD needed it, nothing about the advice I read sounded appealing to me. I didn’t need to hug a stuffed animal, or be wrapped in a blanket, or be gently bathed. I felt all I needed was to go about my day, wearing my happy submissive smile.

It wasn’t until several years into our BDSM journey, when we started pushing more kinky envelopes on our way to a more 24/7 version of D/s, that things suddenly got complicated. We started fighting about our D/s dynamic, something we almost never did before. I would get easily thrown off balance at some small perceived “mistake” in his domination of me. Our arguments led us to wonder if we were unsuited to 24/7 D/s, even though it was something we badly wanted. Then one day, after my darling Daddy had given me the extra hard beating I’d begged for (being overwhelmed by physical force always puts me in a state of awe of him), he was feeling so pleased with his domination prowess that he left me weeping on the couch and went out on the porch to sip on a drink. By the time he came back in, he found that the submissive he thought he had handily subdued was gone, and a furious wife had taken her place. I didn’t know even why I was furious other than I’d endured a difficult thing for him, and then he’d literally walked away. Our fight raged for quite awhile before he finally said, “Maybe I should have given you some aftercare?” Ahhhhhh. What a surprise to discover I wasn’t exempt from the need for aftercare after all.

Still, incorporating aftercare into our D/s interactions hadn’t become habit, and as we continued down the path of more intensive BDSM, it still didn’t occur to us until long after an argument began that our neglect of aftercare could be the source of our friction. Oddly, the friction was often most pronounced when we weren’t even playing with pain. The standard explanation for the need for aftercare is that enduring pain scrambles the nervous system and floods the body with adrenaline and endorphins and all kinds of chemicals that will drop off abruptly at the end of a scene, leaving the bottom in a vulnerable spot (no so incidentally called “sub drop”.) This is, of course, true, and I recall one memorable encounter in which a lot of thrilling violence was used to subdue me, and I ended up sitting awake half the night, shivering in the dark while my Daddy slept off his dominant euphoria. Although my mind knew it was consensual and I had not been abused, my body had not got the message. Aftercare would have made that message more loud and clear and probably headed off that difficult “drop” experience.

Yet, it is not only pain that creates a need for reconnecting with a partner or otherwise come back to reality. BDSM can be a profound immersion into a different kind of mind space, and certain humiliation games, or even one partner going off to play with someone else, can also create a loss of balance that needs to be set right afterward. This need doesn’t exist only for the submissive or bottom, it applies for the dominant or top as well. (Yes, there is such a thing as “top drop.”) Exploring alternative sexuality in any way that takes us away from the beaten path can bring up feelings of shame or guilt (how could I like that?) or cause us to worry that our partner might see us differently. After trying something new or edgy, hearing “Don’t worry, you’re not too weird for me,” can be crucial. Whatever the level of intensity of play, both sides of the D/s equation need reassurance that they are still loved and accepted.

So, what does good aftercare look like? Everyone is, of course, different and will have their own unique needs and comfort measures. Sure, I don’t need to cuddle with a stuffed animal, but that could be the perfect thing for someone else. Although someone overstimulated may not want to be touched again for awhile, most would say that physical closeness and hugs are important. There is no doubt that being pressed close to your partner is the most literal and way to reconnect, to soothe, to comfort. Equally vital is the communication aspect, honestly talking through what happened, how it felt, what worked and what didn’t, and perhaps later, how it might be improved next time. (I often journal about how the experience felt to me in order to share with my Dom the next day). This post-scene communication can make all the difference between a dynamic that breaks down in mixed signals and confusion, and a dynamic that grows trust and becomes stronger.

Other perspectives on aftercare:

How “Aftercare” Can Build Trust and Intimacy

10 Ways to Have Better Aftercare